IoT and Wearables: Building Business for Future in 2022 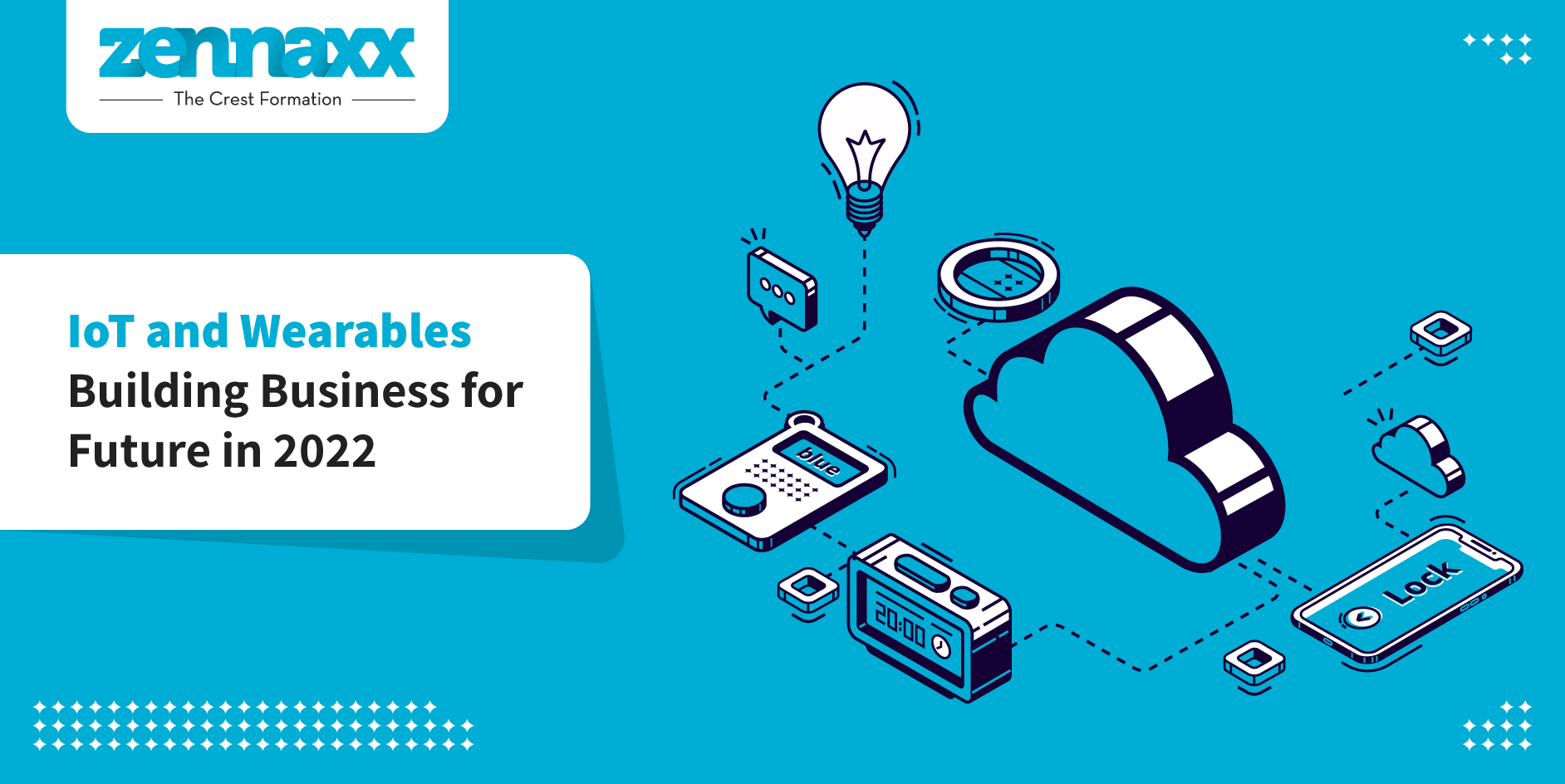 The Internet of Things (IoT) has expanded enormously relatively quickly. Smart gadgets are ubiquitous in the commercial and consumer worlds, and they show no signs of slowing down. While the growth of the Internet of Things may be consistent in 2022, it will vary and adapt as technology moves forward.

About a decade ago, no one had ever imagined a palm-sized wearable gadget that could measure fitness and monitor other human body functions, such as heart rate and stress level. However, the wearable gadget is no longer a futuristic notion, thanks to IoT app development that leverages connectivity choices and increased technology's capacity to downsize circuits.

People are becoming more aware of wearable IoT gadgets such as fitness bands, smartwatches, and smart eyewear, among other things. Wearable technology has improved to the point that it has infiltrated new markets, allowing humans to improve their daily lives. According to PR Newswire, Wearable IoT devices are less likely to become outdated in the future; with a CAGR of 11.3%, the market for wearable devices would reach $62.82 billion by 2025.

Trends that will influence the IoT in 2022.

IoMT will continue to grow.

The COVID-19 epidemic has expedited the adoption of the Internet of Medical Things due to the increasing need for hands-free health solutions (IoMT). In 2021, 64% of US households said they use these services, with 43% saying they are planning to utilize them when we return to normal life after the pandemic. In 2022, these factors point to further IoMT growth.

To prolong at-home therapy, wearable health monitoring, for example, will become more prevalent. Hospitals will employ IoT connections to track resources and make remote appointments. Even after the pandemic has made healthcare more accessible, these trends will continue to grow.

The security issues in the Internet of Things are becoming more concerning as its popularity grows. A breach of linked autos might result in about 3,000 fatalities during rush hour. As the number of IoT devices grows and cybercrime becomes more prevalent, security will become a top responsibility.

IoT manufacturers will incorporate built-in security protections, such as personal computing and verification methods for over-the-air upgrades. Security service providers will supply new IoT-specific services to augment that upgrade. Vulnerabilities will not go away entirely, but they will be minimized.

Industrial IoT (IIoT) is the most promising use for these technologies. The current networks' low capacity and increased latency make it harder to implement. All of that will change in 2022 with the introduction of 5G.

There are 48 billion internet-connected gadgets in use today, placing strain on current networks. Because of 5G's quicker speeds, reduced latency, and higher capacity, industrial facilities will be able to spread the IIoT to additional locations. It is possible to turn large factories into cohesive, networked entities.

Businesses were hit by supply chain interruptions between 2020 and 2021. As a result, more businesses are leveraging the power of top mobile app development company who can get Internet of Things connections into their logistical processes. Companies will be able to detect and respond to disturbances before they occur.

Furthermore, the information gathered by these devices can be put into complex algorithms, which may subsequently provide useful information. These improvements will significantly strengthen supply chains, but they will be difficult to implement without the use of additional IoT. As a result, IoT in the supply chain may become increasingly common.

As IoT networks grow, another inescapable innovation will emerge: the edge computing is the answer. Edge computing can deliver the practicality of self-driving cars while also addressing many of today's bandwidth, security, and cloud reliability challenges. Despite these advantages, it is still a niche technology, but that will change as the Internet of Things expands.

Wearables will raise the bar.

Wearables are the most popular consumer IoT applications, and this trend is likely to continue through 2022. Smartwatches and wristbands dominate the wearables market, but this will change shortly. Smart rings, smart eyeglasses, connected fabric, and IoT ID tags are available and will become popular soon.

The number of connected wearables more than doubled between 2016 and 2019, a trend that more diverse offerings will push. By 2022, wearables will help improve accessibility for people with disabilities, expand the number of augmented reality (AR) apps, and assist businesses in lowering workplace accidents, among other things.

Related: Tips for IoT App Development and Its Benefits

Wearable IoT devices are going to substantially impact businesses requiring manual labour, such as construction and manufacturing. Hard helmets, safety eyewear, boots, gloves, and high-visibility apparel have been needed in these sectors for a long time. Workers will be even more protected thanks to wearable technologies.

Drones may be useful on building sites to map out the region without jeopardising worker safety and to flag any risky spots. Rather than exchanging this information with a computer, it may alternatively be shared through wearables, such as Google Glass-style augmented reality goggles that can map out the area and safe paths around the site in front of the employees' eyes.

Wearable IoT devices may also be useful to track worker positions and detect falls, making it easier to avoid accidents and respond faster when they do occur. Trackers and other tiny gadgets that may be fastened to a belt exist. Still, with the evolution of smart fabrics, it may soon be routine to incorporate this technology directly into work boots or jackets.

Workers might also get alerts from their incorporated IoT devices. Workers can receive the warning sign of threats like moving machinery or hazardous terrain via auditory or vibration-based warnings and physical stresses such as bending, twisting, and tiredness.

Wearable technology is also helpful in teaching workers in high-skilled professions in a limited capacity. Some surgeons use wearable AR to perform keyhole surgery on models while the technology mimics a living creature. A computer can also change this simulation in real-time to illustrate potential problems. These approaches are expected to be adopted by other highly trained professionals soon.

AR goggles may also be useful for project planning and personnel training. For example, Wearable AR or VR headgear allows a person to scale up and move about a 3D model of a project and make changes in real-time by sending signals to a linked computer for a project that requires a scale model. In a pitch or presentation context, the same technology might be helpful to represent a product better.

IoT devices are also helpful in medicine to understand a patient's physiology better and deliver more individualised therapy. Wearable tattoos are constructed of a tiny rubber patch that is adhered to the skin and incorporates a circuit of flexible electrical components.

With little to no annoyance to the wearer, these 'tattoos' may be used to monitor a patient's vitals and construct a comprehensive health profile on them over time. This data can be relayed in real-time to healthcare specialists.

Wearable tattoos can give more accurate and complete data about a patient. Still, they can also identify indicators that the patient has a health profile that predisposes them to specific diseases or health issues. Having access to this information allows physicians to anticipate certain future health issues and better understand which therapies will be appropriate for the patient and which may produce previously unknown repercussions.

Related: 10 Features To Include For A Successful Fitness App Development

Analytics using wearable IoT devices will also have long-term advantages outside of healthcare. The ability to measure worker activity, location, and stress levels will aid firms in streamlining their processes, improving the structure of their workplaces, and identifying where time is spent. Athletes are already utilising analytic IoT technologies to assess their performance and strategies to identify areas for growth.

Some companies may use wearable technology to monitor their employees' general health and well-being. They may utilise it to build a more welcoming workplace that prioritises employee happiness by decreasing stress-inducing events.

Much of the wearable IoT technology is now in the form of external devices that users must equip themselves with, such as goggles, smartwatches, or movement sensors. Still, as technology advances, we may expect to see more and more traditional articles of clothing enhanced with IoT capacity.

While the construction and medical industries are going to profit from wearable IoT growth immediately, this technology will become increasingly common in other corporate sectors and home usage.

IoT is more of a philosophical idea than a scientific phrase with a defined structure in business. However, it brought together many digital disciplines that had previously only been useful to us individually and separately.

It must come as no surprise that the Internet of Things is also a socio-cultural phenomenon that is already influencing our surroundings. It is critical to realise the potential of IoT concepts during this time for people who want to build a company and those who manage a business.